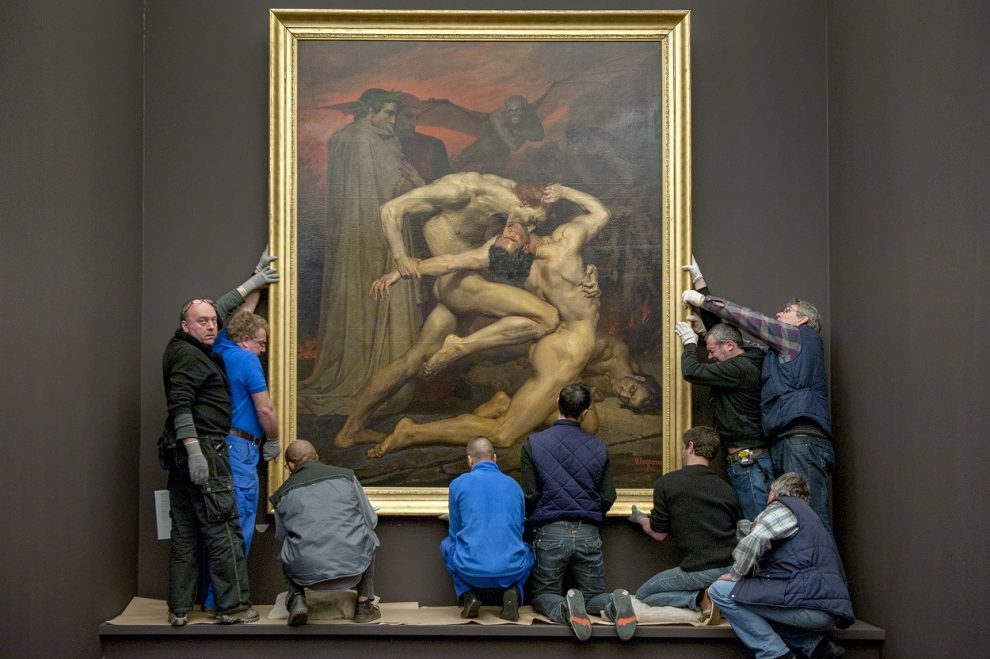 In his ongoing series “Accrochages” (Hangings), Paris-based photographer Nicolas Krief studies the behind-the-scenes logistics that enable museumgoers to experience art in hallowed institutions. “Accrochages” depicts art handlers hoisting and arranging works to execute curators’ visions. The images show us art outside the impeccable context we have come to expect for its public consumption.

The series at once highlights and dismantles “our almost religious relationship to the work of art,” Krief said in a phone interview from Normandy, where he is quarantining with his family. That sense of sanctity applies across art genres and historical epochs: there is just as much reverence for contemporary art as for a Holy Nativity or Crucifixion. “From the moment a work enters the museum space, it becomes ‘art,’” Krief said. Museums validate prevailing ideals of creativity, social order, beauty; this is the process Krief seeks to examine in the most concrete terms.

Krief makes art seem less static by defamiliarizing the works, which are ordinarily presented just so. Packing tape, measuring devices, crates, cloth coverings, ladders, and vacuum cleaners—all essential to the choreography of installing a show—demystify any willful illusion that an exhibition drops into the museum fully formed and denature the idea that artworks are inviolable totems.

Krief’s images feature visual echoes and contrasts: uncanny mirrorings of hands inside and outside a painting’s frame, inanimate faces that seem to peer into human ones, and the twinning of frozen forms with active handlers and curators. There are also amusing intrusions—like a blond woman with a rainbow-hued duster boldly invading the grays of Gustave Caillebotte’s Rue de Paris, temps de pluie (1877). The woman’s presence is a disruption of both palette and historical chronology, which the couple within the frame seems to give bemused side-eye notice. “A little humor helps you consider something for what it is, and not just venerate it,” Krief remarked.

The series began when the French newspaper Le Monde commissioned the photographer to take a curator’s portrait on the occasion of a major Claude Monet exhibition at the Grand Palais in 2010. The Réunion des Musées Nationaux (RMN)—an organization that oversees many French museums, including the Grand Palais—approached Krief about expanding this into a long-term project about the process of installing exhibitions. Formerly, the RMN had routinely photographed shows as they were being mounted, a practice the organization wished to revive.

In total, Krief has photographed about twenty installations, the most recent of which was a Second Empire show at the Musée d’Orsay in early 2017. Each installation takes two or three weeks and during that period, Krief pops by daily. He is given no restrictions of what he can document—except security measures, such as how a panel is secured to the wall.

Krief doesn’t crop photos, use fill lights, or ask people to pose. “I work as a documentary photographer: no mise-en-scène,” he said. Krief is aware of the legacy of photographic documentation of museum life. He cites a series by Robert Doisneau (who portrayed employees toiling at the Muséum National d’Histoire Naturelle in 1942–43 and again in 1990) and a collaboration between the Musée d’Orsay and the French photography agency VU (five of whose photographers chronicled different aspects of the museum experience). His own approach is simple: “I want to disappear. I want to immerse myself and be forgotten.”

How to snake discreetly amid the exertions of art handlers? Krief insinuates himself as judiciously as possible, both spatially and socially. “You have to be accepted by the teams; if the teams don’t like you, you can’t work,” he said. The nature of the relationship is often tacit, however: “When I arrive and they are putting up heavy sculptures or a painting, I am quickly forgotten; they are concentrating.”

Krief emphasized that he’s not photographing the artworks themselves, but creating images in which they make cameo appearances. Formal relationships and graphic impact are what guide him. He doesn’t study up on the works in advance—“no homework,” as he put it. “I do everything to keep my spontaneity,” he said. “It is important for me not to let myself be swayed by the works that I see being handled. If you start to say: ‘this is a Picasso, this is a Pollock,’ you end up being paralyzed by a key moment in art history.” Rather, he photographs people at work. The “Accrochages” series has altered Krief’s perceptions as a spectator. “The smells of construction sites, of new paint—I didn’t smell them in exhibitions before! Now I understand that some works were complicated to place and mount,” he said. Still, his perspective stays fresh due to what he describes as a kind of invested amateurism. “My expertise is a false expertise. I am not someone ‘from’ the museum world,” Krief explained. “I’m just a tourist—it’s not my job to work on exhibitions. But I end up having real intimacy.” That sense of closeness is exceptionally potent now: looking at these installation in virtual form on our screens reminds us, by contrast, of the physicality of art, and how being in its presence spurs curiosity, astonishment, conviction. While museums are currently inaccessible—their contents temporarily relegated to the realm of the intangible—witnessing this depiction of meaningful substance and bodily response evokes a heady, deeply wistful remembrance.

Christo, Fearless Maker of Massive Public Artworks, Has Died at 84

Christo, Fearless Maker of Massive Public Artworks, Has Died at 84