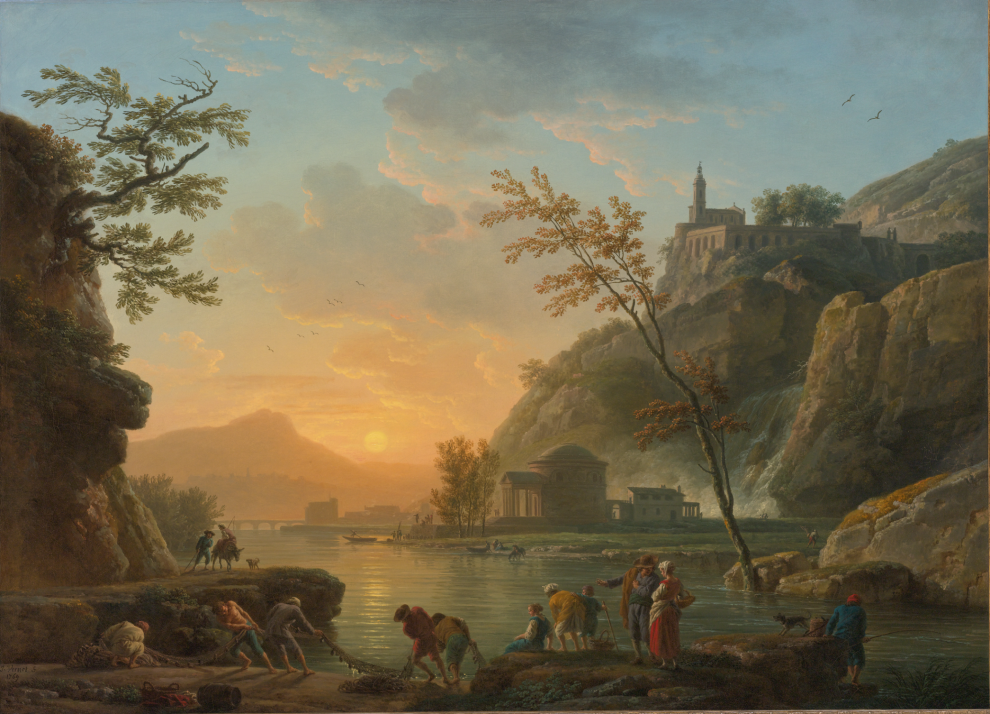 PROVENANCE
M. de Longvillers, Montreuil-sur-Mer (according to a drawing after the painting, executed by Charles-Nicolas Dufour, in later publications his name becomes ‘Longvilliers’);
Jean-Baptist-Laurent Boyer de Fonscolombe, Aix-en-Provence;
Acquired through art dealer Pirling and Cie by Tzar Alexander for the Hermitage Museum, St Petersburg, in 1803;
By whom passed to Antiqvariat, 28 May 1933;
By whom sold, probably to Cailleux;
Paul Cailleux, Paris, by 1935 (according to the Copenhagen exhibition catalogue);
By whom sold to a private collector, 16 February 1951;
Thence by descent within the family;
By whom sold Paris, Christie’s, 20 June 2007, lot 54;
With Richard Green, London;
Private collection, New York;
From whom acquired by the present collector.

CATALOGUE NOTE
This magnificent view, showing an Italian coastal scene at sunset, with fishermen gathering in their nets, is an outstanding example of Claude-Joseph Vernet’s landscape painting. Bathing the scene in a golden, crepuscular light, the artist displays here his mastery in the depiction of dramatic landscapes, contrasting the rugged rock formations and weather-beaten trees with the calm, shimmering waters and tranquil, naturalistic figures. In 1734, under the sponsorship of the Marquis de Caumont, Vernet left for Italy where he would remain for almost two decades, painting and sketching his surroundings and establishing himself as a marine and landscape painter. His compositions bear the influence of the great landscape painters of the previous century, of Poussin, Claude Lorrain and Salvator Rosa, encapsulating both the majestic skies and the transcendent power of his natural surroundings. Yet, in contrast to those of his predecessors, Vernet’s figures do not appear dwarfed by their surroundings, appearing instead to exist harmoniously in their midst.

Upon his return from Italy, the artist was employed by King Louis XV to create a pictorial record of France’s harbours and coastline. The topographical commission was to occupy him for a further ten years, until finally he settled in Paris, where he returned to painting the Italianate landscapes that were so close to his heart. It was during this period that Vernet was to execute the View of Reggio di Calabria, along with its pendant, Entrance to the port at Palermo. By 1769, the year the present painting was executed, the artist was at the very height of his career and no European collection was deemed complete without at least one painting by his hand. Many of his views by this time, however, were almost entirely imagined, lifting elements from existing landscape and working them into his own invented compositions. While we know Vernet travelled to Naples, there is no evidence to suggest he ever visited Reggio di Calabria or indeed Palermo, nor do the paintings display any recognizable landmarks from those regions. It is entirely possible that the titles were the invention of Nicolas Dufour who engraved the works and inscribed their titles on the reverse (see under Engraved).

While details of its original commission remain undetermined, the painting has since enjoyed a provenance of considerable prestige. Nicolas Dufour’s inscription tells us that at the time of the engravings’ execution, the painting was in the collection of Monsieur de Longvillers (later listed as ‘Longvilliers’ by Florence Ingersoll-Smouse) in Montreuil-sur-Mer, northern France.2 According to Louis Clement de Ris, the painting then passed to the lawyer and illustrious collector, Jean-Baptiste-Laurent Boyer de Fonscolombe (1716-1788) in Aix-en-Provence.3 The Boyer de Fonscolombe collection, comprising some two hundred paintings and over fifteen hundred drawings by some of the most prominent painters and draftsmen, included works by Rembrandt Harmensz. van Rijn, Claude Lorraine, Jean-Honoré Fragonard, François Boucher and Giovanni Paolo Panini. The collection also boasted two further works by Vernet, a Rocky landscape in the manner of Salvator Rosa, listed among the works sold following Boyer de Fonscolombe’s death, and a Clair de Lune, commissioned by the collector himself and noted in the artist’s Livre de Raison.4 Following Boyer de Fonscolombe’s death in 1788, two sales were held of his collection: one on the 18 January 1790 in Aix and another in Paris on 13 December of the same year. While both the Clair de Lune and the Rocky Landscape were listed for sale, the present painting and its pendant do not appear among the lots, suggesting the pair were retained by the family of the deceased.5

The View of Reggio di Calabria and its pendant were then acquired by Tzar Alexander I of Russia in 1803 for 4,000 roubles, via art dealer Pirling and Cie, for the Hermitage Museum collection, Saint Petersburg. The paintings appear in the museum’s catalogue from 1880 (see L.C. de Ris under Literature) and the reverse of the canvas still bears Russian markings, including the inventory number 1559, the number under which it is noted by Louis Clement de Ris. Scholarship remains divided as to whether the View of Palermo entered the museum earlier, with Louis Réau suggesting it was purchased for the collection under the reign of Tzar Paul I, though Ingersoll-Smouse and Nemilova agree it was acquired simultaneously with its pendant in 1803. Tzar Alexander also bought an earlier work by Claude-Joseph Vernet, a View of the Città Nuova signed amd dated 1761 (inv. 1549), reuniting it with its pendant, Marine (inv. no. 1558) that was bought for the museum under Tzar Paul I. While the Città Nuova pair has remained united at the museum, the View of Reggio Calabria was separated from its pendant, and in 1933 passed to Antiqvariat, an agency charged with the sale of works from the Hermitage, largely to foreign buyers, to fund Russia’s rapid industrialisation Russia in the late ’20s and early ’30s. It seems most likely the painting was acquired from them directly by the Parisian gallerist and dealer, Paul Cailleux, who bought numerous paintings from Russia in this period. The present painting was sold in Paris on 16 February 1951, remaining in the family of the buyer until acquired by a private collector in 2007. The painting’s pendant, meanwhile is still housed at the Hermitage, Saint Petersburg today. 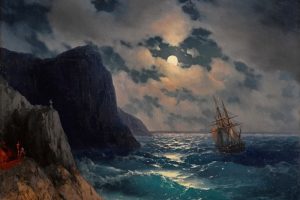